The Orchestra da Camera Fiorentina ranks among Europe’s leading chamber orchestras. Renowned Italian conductor Giuseppe Lanzetta founded it in 1981, and its members are all honour members of the famous Conservatorio di Firenze. The Orchestra has been described as distinctive, “reflecting the widest range of composers of the chamber musig genre“, no small feat considering that Toscanini himself once described the performance of chamber music as “the most intellectually challenging and emotionally intimate collaboration between musicians“. The Florence Chamber Orchestra‘s reputation has grown steadily thanks to appearances on Italian TV and radio, as well as performances at venues around Italy. They have also performed internationally, including at the Mexico City International Music Festival.

Marco Lorenzini studied violin with Maestro Roberto Michelucci at the Conservatorio di Firenze, from where he graduated in 1981. He went on to study viola at the Conservatorio Morlacci di Perugia. He has worked extensively with the major symphony orchestras of Tuscany playing under the direction of famous conductors and soloists. For more than 20 years he has held the position of concertmaster soloist of the Florence Chamber Orchestra. During this time, he has played at several prestigious music festivals in Brasil, Malta, Slovenia and Poland. Many of these concerts have been transmitted on television and radio. Lorenzini is the first violin of the Ensamble Michelangelo, he has composed numerous pieces of chamber and soloist music.
He is one the most brillant musician among today’s generation. 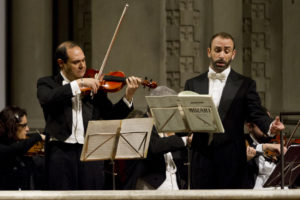